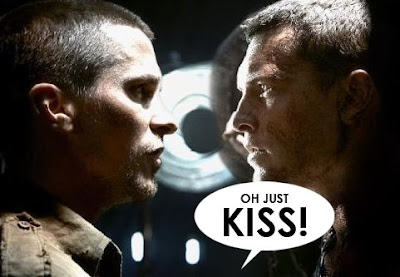 So I went to see 'Terminator: Salvation' with little or no expectations other than it was going to be dark, dingy and terrible (I think I was braced for something like the IKEA marketplace at 11am on a Saturday). Popcorn in hand, the titles roll, and I'm hunkered in for what I think is the long haul. Two hours of people shouting at each other and horrible, desperate acts of humanity when, out of left-field, I was presented with my now-favourite moment of cinema ever: as the lists of elevated soap-stars and rappers zipped by, it finished with the line '...AND HELENA BONHAM CARTER'.

I just leant forward in my chair and exclaimed 'What the shuddering FUCK?!

Seriously. I'd not read any pre-publicity, so this was a twist out there among the likes of it was a sled, she was a bloke all along, he was his father, and they actually let her go shopping in 'Pretty Woman'. Helena Bonham Carter?! In this? It was like finding Madonna starring in your local school play. Where she was playing the lead, not some scary child catcher or chupacabra! I was rapt, and this was only two minutes in!

Meanwhile, the rest of the audience shifted uncomfortably. I think I figured out why all those people who were expecting a brash buddy movie came out tutting and wanting to blow something up, because what we have here is subversively the gayest movie since 'Top Gun'. It may be the love of a man and his machine, but hell yeah, this is the 21st century, and it'll probably be legal in Maine before you finish reading this, bless.

Set in the dystopian future, which means all the colours are bleached and All Saints clothing outlets look like they're doing a roaring trade in post-apocalyptic grey and where you seem to have been bombed with the 'friendly' sort of nuclear fall-out enabling you to wander through cities that were leveled 12 years before without your hair falling out. In the middle of this is one of our star-crossed lovers, John Connor (played by Christian Bale) who, once again, has a scheme that's going to stop the machines - until the next film, natch. Honestly, all his plans should come with 'ACME' lettering on the side.

Bale's performance as Connor is a simplistic cipher, content to convey the pain and trauma of the character journey by shouting a lot, and angrily staring with those mad, mad eyes at whomever he's with. Bale seems terribly slack-jawed too; I don't think he closes his mouth throughout the whole film, at least giving the audience the chance at some humanity to the endless explosions by idly pondering, 'I wonder if he suffers from sinus trouble, poor love...' Personally I was simply mesmerism by this wonky tooth he has on his bottom row of teeth that was permanently on display, an otherwise abboration in his perfectly white-teethed gang. If we're being pedantic (which we are) I have to say that end-of-the-world resistance dental plans must be brilliant because every set of gnashers on display come from a Sensodile ad. Well, bar Bale's. He could use it to open sardine cans. Really.

Delightfully, even the movie seems bored with Bale's one-note performance, so confines him in a room with a pregnant ginger wife just to make him think about his mistakes. For the first half, we concentrate instead on a road movie with Wright trying to find Connor, meeting other cast significant to the mythology along the way. Including a woman pilot who he shows no physical interest in at all, despite her wrapping her legs around him as often as she can. He possibly objects to her because it looks like she's put on her eye make-up using two bits of masking tape and a spray can; this, plus no mention of a girl left behind and costantly banging on about how he's got a 'second chance' makes me think that he's two minutes away from finding a boom-box to play Diana Ross' 'I'm Coming Out' across the ruined city. His only other screen kiss is with Dame Helena Bonham Carter who even I would because she's fricking HELENA BONHAM CARTER!

Meanwhile, you can spend the rest of the time enjoying the plot-holes caused by storytellers trying to bolt on continuity to a constantly-shifting mythos. Even those little holes, like why there's a chair in Skynet's completely automated control room. And if there was a plan to bring John Connor to Skynet to kill him in a factory where they make thousands and thousands of Terminators, why on Cher's Earth do they simply send one after him? Were the rest out for training?

Anyway, back to the central romance. The two future lovers meet and Connor ties Wright up in a darkened room (bit forward for a first date, but we'll let it slide). They hate each other, clearly. So much that they spend their entire first scene mere millimeters from each other's face. And hate turns to trust, that turns into dependence, that turns into... well. I'm not usually shy of being the one to call a spade a spade, but when your final shots of the film are a misty-edged moment as Connor and Wright are lying next to each other, staring into each other's eyes and Wright literally gives Connor his heart. I'm just saying, that's all. This film is gayer than 'Pricilla, Queen of the Night on Brokeback Mountain'. Even Arnie's much lauded digital appearance has him arrive naked, back-lit and waist-deep in smoke. It's not so much a cameo as a PA for go-go boys at Heaven nightclub.

Perhaps the reviews would have been kinder if they'd put their money where their mouth was and called it 'Terminator: I Now Pronounce You John and Marcus'. Where they get married. with Helena Bonham Carter as the vicar.

It's All Kicked Off!

I don't often get to talk about my work - it chugs away nicely in the background, much like Lindsay Lohan on her bottles of 'water' when the press are watching. But this week was the culmination in a year-and-a-half's work (designing this bad boy) and getting ready for send-off. Ah, you'd think that the final week would be a delicate shade of easy, spent sipping cheap wine as you transfer all the files to a hard drive that a courier will pick up. Hopefully an attractive one. Who announces that he's going to need a sit down as his tree-trunk-like thighs have cramp, would you mind giving him a quick massage, and that he's always wondered what being with a man would be like. And I'd say 'wonderful'.

This is not the way, alas. The final week of these projects is file checking and compiling, which basically meant sitting at a computer and manually opening, checking and converting over a thousand files. And Adobe are no help: My and Photoshop's version of 'Automated Macro' differ considerably. It wants me to click and affirm these files like a needy child. I want it to bring me Pimms. All in all, I basically sat there as if it was the computer in 'Lost', entering 'yes' every 108 seconds.

Or Gaydar, come to think.

Anyway, all of this was very annoying because there was so much going on that I wanted to talk about!

Whatever your political leanings, there's something delicious about the last days of an empire. And let me tell you, what's going on over here at the moment is just like the last five minutes of 'Blake's 7'! Everyone's resigning! Now I used to like Labour (our current government, overseas viewers) but after ten years of the same guy, he was ousted and his friend took control. I know we vote for the party over here, not the person, but there's just something slightly insidious about the way he stepped in and took power without the populous having a say. As a nation, Britain tends to dislike show-offs (we're always behind the Big Brother contestant who appears to be humbled by the whole thing, and vote out the show-offs) so there's a whole lot of indignant "Excuse me, and you are..?" from everyone. And besides, he looks like Baron Greenback from 'Dangermouse' when he's trying to think. Does not want.

Poor love! Gone a bit screwy with all the attention - something that I can identify with. I mean, there was a time in a... lets call it a Gentleman's Recreational Health Club, when I was practically batting members away from me like a kitten on catnip. I think that its wonderful that she's had a bit of time out to be able to breathe; I had to do the same after an hour-forty of being what we call in the business 'air-tight'. Thank heaven I know circular breathing after five lessons on the bassoon - I have a feeling that if by some miracle I'd evolved a blow-hole there and then it would have been stuffed full in seconds. Oh, happy happy days.

For scant seconds on the BBC News site, they were reporting that he was found in his hotel room hanged with 'a rope around his neck and genitals'. This went down fairly fast, but we al got the idea. Well sort of. I hope it wasn't a sex game. He was 72 for goodness sake. It'd be trying to squeeze mozzarella through an icing bag.
And that poor maid that found him, lets think about her. She probably thought that someone was drying jerky in the wardrobe until she got close.

And there we are. I'm off for a day off. Have a nice weekend, y'all.
Inserted by Lee at 11:38 am 3 comments:
Newer Posts Older Posts Home
Subscribe to: Posts (Atom)