The war of the sexes just took a petty turn: in the fine city of Boston they have started a campaign against 'man sitting'. You know, when a fine youth usually in tracksuit bottoms take up a little extra space in order to display their produce by the means of a little wider leg-room. Personally I think its a lovely sight on the way to work, and one of the few perks that get me through the morning. The others being my hipflask and my cheerful, giving demeanor when handsome strangers ask if I 'have the time?' Especially if there's a hilarious misunderstanding and their hotel room is actually quite close.

What distresses me more about this man-sitting campaign is firstly that they have badges that are so badly designed they look like Microsoft clip-art. And secondly that they may be trying to bring the campaign over here to England. Look at what you could be staring at across the isle:

I look forward to seeing them try, where some sexually-frustrated spinster spies a man with his legs apart over the way, coughing dramatically and tapping their lapel like a magpie with A.D.D. No-one would take the blindest bit of notice. And if we're going to give up comfort, we should expect a similar loss on the opposite side of the gender war. I shall make you a deal: we'll sit 'properly' if you stop reading Mormon abstinence clap-trap 'Twilight' on the tube. 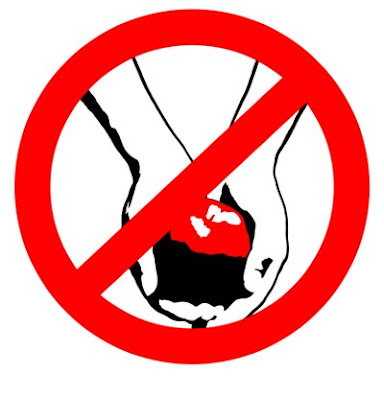 Oh well, that explains it.

You see, I was walking down Bond Street when two suited gentleman pulled up in a BMW and offered to give me a double-hoop for a low price. I said I hadn't done that sort of thing in years, but there was probably enough room on the back seat if I got my legs through the sunroof.

As I'm often three years behind with the current cultural zeigeist (apparently the cake is a lie) as so I've only just I've only just got involved in Spotify, the music streaming site. What impresses me is the volume of songs on there all for free (FREE!) and the only catch is that you get the odd advert irregularly inserted into your selection of Cher remixes. All well and good.

Well, you'd think. I did spend a bit of time on the Yahoo music service some time ago, which was delightfully clever and after a couple of musical cul-de-sacs, we settled in to a bot-suggested playlist comprising of the whole Bette Midler back catalogue with some sidelines into the Scissor Sisters. Spotify doesn't appear to have that ability at all; with my musical tastes making my computer sound like its owned by a six-year-old girl and covered with stickers of Zac Efron, it keeps going 'Hey! Why not download some Tom Petty?!'

In fact, I'd happily fill in a questionare somewhere if it'd help. Some of the adverts that spring up inbetween Christina, Barbra and Girls Aloud are for giving blood - chances are that if I'm listening to that combination, my darling darling things, is that I'm as gay as a goose and you don't want my pink-tinged blood anyway.

So, the hilarious Michael Jackson stories continue to come out. And this weekend, we had the tale of an former child star Mark Lester claiming that he may be the father of one of Jackson's children.

All well and good. But apparently he's not sure - which implies that he was perfectly happy handing over his love-syrup to Jackson without knowing what was going to happen to it!

Are stars really that stupid? Really? I mean, are people willing to hand out their spaff to anyone who asks for whatever reason they say? I do hope so. I'm just off down the Post Office to send Adam Baldwin a charmingly polite note and a pyrex beaker.

Yes. Not a test tube. A beaker.
Inserted by Lee at 11:54 am No comments:
Newer Posts Older Posts Home
Subscribe to: Posts (Atom)