Hello, what's this? A new Kylie album? How lovely! Who isn't going to be drawn in by its gorgeous cover depicting Dame Minogue calling all the Gentlemen Who've Locomotioned to prayer?

And - bonus - the first single 'All the Lovers' is about on the interweb too. It's fabulous, and has Kylie once again doing that seductive, breathy singing she's taken to of late (perhaps vocal chords botoxed as well?) to ask us why we're not dancing. Sweet of you to ask, love, but I've had a really long day. Popped my knee out in yoga this morning and been walking in circles ever since.

She then goes on to state that 'All the lovers that have gone before don't compare to you.' Aww sweet! Which is basically saying to me 'Look, I've been around the block a bit. So much so that my minky now looks like a bulldog eating porridge. But you know what? It's all good because you, my lovely, can actually touch the sides.'

And that's proper romance if you ask me. Its out in June. I'm going to buy it. You should too.
Inserted by Lee at 7:37 pm 7 comments:
Labels: music

The 80s were the first decade I can properly recall, you know. So this sudden lust for power ballads and tight perms fills me with the same detached concern my mother had when I started idolising her decade of the 70s, when I was listening toChakka Khan on repeat and wanting hair as straight as Cher's. I think that's why she was concerned, although the impromptu performances of 'I'm Every Woman' with the shower curtain about my shoulders may have tipped her off to the greater problem that she wasn't ever going to getgrandkids. Poor love.

Anyway, last night I thought I'd crack open my '80's Films For Working Girls' box set (currently available from HMV at a very reasonable £8) and brave me some corporate shenanigans with 'Working Girl', and wonder why almost every film in the 1980s was set in an office or a cocktail bar. This one has Melanie Griffiths breathing her way through a corporateaquisiton with all the personality and presence as a hair on the lens. However she managed to get lead roles is a mystery to me now as it was back then. I was hoping to glean some insight into her appeal by reading her self-penned instructional tome 'How I Act Good' but I got to halfway through 'Chapter 1: Vacuuming in High Heels' before I gave up. Not just reading - the will to live.

It doesn't help that La Griffiths is sandwiched between Sigourney Weaver (seemingly constantly checking to see if the scenery has a calorific value so she can eat it) and Harrison Ford, who's just started to sleepwalk through his roles. I saw him in 'Firewall' recently and I'm surprised there wasn't more footage of the director holding a mirror under his nose made it into the final cut. But even him on autopilot has more life in him than La Griffiths. They try and make her interesting by wearing very nasty lingerie several times; the only effect is making her look like uncooked string-tied gammon.

Eventually La Griffiths makes her takeover bid and bags sleepy Ol' Man Ford as well, proving that the moral of every 80s film is either greed is good and will get you laid, or if you can flick a cocktail shaker over your elbow you will also get laid. The other thing I discovered is JoanCusack place in this decade's pecking order: her hair is backcombed so high, she blocks the sun on The Statue of Liberty every time she takes the Staten Island Ferry. Her eyeshadow is so thick and green it looks like she's been getting make-up tips from The Wicked Witch of the West. Oh Joan. I look at you. I think you may have won the 80s. All of it. 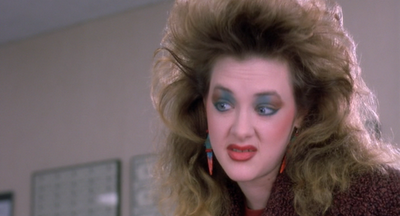