So far I haven’t been seduced by the smartphone revolution because I’m a luddite who barely understood teletext when that was on. And yet, here I stand on the cusp of a contract upgrade, willfully holding back on whatever must-have gadget that is currently doing the rounds. I am naturally reticent to get an iTelephone because I’ve made my feelings on any and all of Apple’s smug Talking Tupperware products clear within these garishly pink pages; although I will now add to my distrust the bizarre phenomenon of, as soon as you mention an iTelephone, any and all users in the vicinity removing them from their pockets and bags and stroking the screens. Do please try it, if you can bear the strange sight of man petting machine so lasciviously. Just the name of the device, and this will cause the owner to subconsciously reach for it, as if to affirm that such wonderful technology does truly exist and they didn’t just dream up this life-changing cultural zeitgeist in the night. Most bizarre.

What I cannot get my head around is it clearly is terribly bad at a good percentage of the functions it proclaims, yet all of these owners still dote on them with the forgiveness of a backward child. As I’ve been edging towards getting one, I’ll ask these bewitched owners about the terrible camera and the fact that it drops calls and they’ll just stare at me with glassy eyes and say “But it’s changed my life...” before going back to pecking away at their Apps like hens with A.D.D. So it doesn’t function as a phone? “Oh, but its so much more than that...” they’ll say. One can only assume that the spinning little wheel that appears whenever its processing is a tiny little hypno-disc that calms and soothes the user as it fails to work on every other level.

The only reason I’m still thinking about getting one is the Apps - most of which sound like a delight to use. I tell you, if I were single I’ll be all over the Grindr application - the mobile version of gaydar. The idea is that you activate it, and it shows you how many Gentlemen Who Moisturise are in your vicinity who are up for a bit of bum fun. Although clearly as it was designed by gays, it can’t do measurements for toffee: one of my friends activated it in his lounge and was most startled to discover there was a gay apparently one meter away. Cue a horror film slow-motion turn to have a look behind him, only to discover no-one’s there. Apparently some bars now hold Grindr Parties, the thought of which fills me with a unearthly horror as I picture crowds of zombie screen-jabbers talking through the medium of their tedious device, lined up the walls like Borg in their alcoves.

Of course, the other option is Google’s Android phones, which seems far more efficient... and deathly dull as a result. Yes, its got lots of worthy apps to help you shop and recognise buildings via pictures you take, but can you throw Angry Birds across the screen? Can you bogroll. To cement this, one of my other friends decided to get the Android version of Grindr - and all that popped up was a man called Barry who worked in IT who was 42km away. I do not want to be these people. I want to be fun, and interesting... and yet you’d think that would point towards the iTelephone, but from everything I’ve seen of it, it is anything but. It removes part of your brain and only enables you to communicate via displaying YouTube clips and pictures of other friends sitting in other bars. Can’t I just stick to my old phone? Please?
Inserted by Lee at 10:18 am 30 comments:
Labels: technology

Set The Outrageometer to Moir 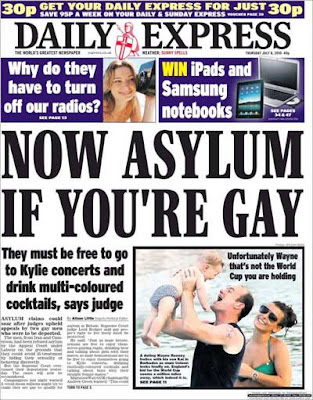 Oh yes, the Daily Express. Well done. I thought you’d take the positive view on this one.

Bit of back story for you Johnny Foreigners: the Daily Express is read by six people, all of them hate anyone who doesn’t like Antiques Roadshow and wears ‘a funny hat’. They normally spend their headlines saying either saying that an everyday object can give you cancer, or that Diana, Princess of Wales was killed in a horrible conspiracy and not enough of us own plates with the Queen’s face on them. Not that you should ever use these plates, you proles - how dare you sully Her Majesty’s face with your Sommerfield arctic roll. That’s treason, that is.

And the headline story is the victory of two gay men at the high court, both of whom were facing deportation back to their own countries where homosexuality was illegal. This was the appeal to a previous judgement that was going to return them with the note saying ‘Basically, keep your trap shut, don’t mention the manicure, and you’ll be fine’. What quality of life this must be. Finally, the High Court saw sense and let the two defendants stay in the country - with the hilarious summing up from Lord Rodgers ”...so male homosexuals are to be free to enjoy themselves going to Kylie concerts, drinking exotically-coloured cocktails and talking about boys with their straight female mates.” Oh La Rodgers, when did you sneak in to see ‘Sex And The City 2’, you sly old dog! You got us pegged exactly right! That’s all we do!

Wait, that was a knee-jerk reaction: I would like to say I do more than drink multi-coloured cocktails, listen to Kylie and bang on about nice cocks, but I'd be lying. Absolutely bare-faced falsehood. For Cher’s sake, there’s been over a thousand posts on this dastardly pink site, and all of them are to do with the above trio Points of Interest. I think I’m delighting more in the bigger issues here: all of a sudden, gay people can ask for asylum here, opening the floodgates for feather boa-wearing queens in hot-pants. This a bad thing, I have to ask? Ever since the cheap-yet-diligent workforce of Poles have buggered off to where the money is (apparently Sweden) we’ve a yawning gap in our capacity for manual labour, mostly because we British are too happy at home watching Jeremy Kyle to clean McDonalds toilets. Personally, I wouldn’t mind any hole filled by a delightfully swarthy Gentleman Who Can’t Catch, but that’s a whole other story.

Slight sideline: as there’s a test for British Citizenship (try it if you’re a UK national - the pass rate is apparently 75% - and I got 40%. I’ll get my Louis Vuitton luggage and get out...) does this mean that there’s going to be a Gay Test for asylum seekers? And can I watch? Although one would assume it would be a government official holding up pictures of female soap stars of the 1960s and being told to indicate which ones were fabulous or not (here’s a clue - if they’re wearing curlers, it doesn’t instantly mean that they’re dowdy).

The problem is, as this media swirl ramps up from when it started, the idea of drinking exotically-coloured cocktails and popping along to see Minogue K do a set (hopefully Old Sexy Kylie. New Hyperventilating Kylie can float off) is more and more appealing as the morning wears on. It’s a hard life, I know. Personally I’ve found it tough to include multi-coloured cocktails in every part of my life, but have just gotten used to my All-Bran Daquiri of a morning. But that’s me: drunk and regular.
Inserted by Lee at 11:14 am 7 comments:
Labels: gay, media outrage

I have a sudden urge to hang up my Ruby Slippers. I’m no longer feeling like the gayest gay in the neighbourhood.

This weekend was Pride, for one. I’ve never been proud in the slightest, and can’t abide crowds. Gay crowds even more. Where crowds of straight men tend to bellow (cf football matches), a mince (a clutch? a squeal?) of gay men tend to bleat. Whenever Hazel Dean is inevitably wheeled onto the main stage, there’s going to be a thin, penetrating squawking, as if someone had squeezed 2,000 vuvuzelas into nasty TopMan t-shirts and run loose with the glitter make-up. I do not want any part of this.

One friend tried to strong-arm me into going, saying it was ‘important’ and ‘political’, but I really can’t see the solidarity in fellow man by wandering from a pasteboard table covered in butt plugs to the bear tent and back again in the sun. Instead I elected to pop into town early and get all my shopping needs out of the way before city filled up with provincial gays completely beguiled with the idea of a two-storey H&M. Turns out I was too late, and lo, got trapped on Oxford Street as the Pride March tottered past. And all the parade seemed to be was open top buses from nasty nightclubs from Milton Keynes, whippet-thin creatures of indefinable sex leering over the side at the passing crowd and blowing whistles like it was the only way they knew how to breathe. Does anyone else find it apt that whistles are the weapon of choice for shrill gays across the world?

And while we’re on the subject, I notice that Minogue K has a new album out (a cunning segue there, I think you’ll find). Here’s a simple review: ‘Aphrodite’ is perfect music to hoover to. Minogue K is once again diminutive proof of the law of diminished returns after her career peaked with a song that is basically ‘La-la-la’ for three minutes, and ever since then has been trying to recapture that nursery-rhyme high point by throwing as many big name producers at an album as will stick. This latest album does bounce along with the best of intention, but the more I listen to Minogue K’s voice, the more I’m reminded of an angry wasp in a biscuit tin. Like the gays on Pride Saturday, you’re best to avoid.

I do hope I’m not leaving the gay community entirely. There’s always been a slight instinct to fade away over time, like a slightly-fruitier Cheshire Cat, and with two touchstones kicked away, you do have to wonder. I shall let you know the moment the posters of Cher come down out the bedroom, darling viewer.
Inserted by Lee at 2:33 pm 6 comments:
Newer Posts Older Posts Home
Subscribe to: Posts (Atom)